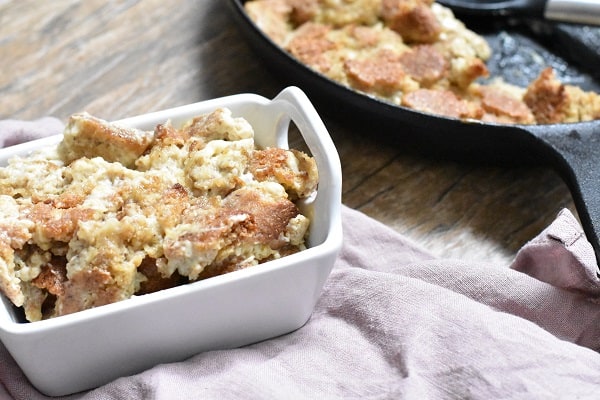 If Bread Pudding sounds like a dish you’d never expect to be Keto, think again! This rich, comforting, oh-so-delicious treat is simple to make and sure to be a crowd-pleaser. You’d never guess it’s low carb!

…but if we’re being perfectly honest here, I definitely ate this for breakfast this morning with a side of my Keto Maple Bacon. And it was SO GOOD!

The sauce also pairs perfectly with other desserts. I poured it over the mug cake from my Keto Single Serve Cake recipe (just skip the frosting step) and it was simply divine.

Long story short: this dish is an absolute treat no matter when you choose to enjoy it!

How Can You Tell If Keto Bread Pudding Is Done?

For this recipe, you will bake the bread layer first, rip the bread into chunks, add the sauce, and then bake it all together for another 30 minutes.

I recommend the final 30-minute bake because it really allows for the flavors to come together, gives the bread time to soak up the sauce, and makes the top layer just a bit crispy! This is my favorite way to enjoy Keto bread pudding.

However, because all the ingredients are already cooked before the final 30-minute bake, the bread pudding is technically done whenever you want it to be.

If you’re in a rush, or if you prefer less bake time, feel free to pull the bread pudding any time!

How Would You Describe Keto Bread Pudding?

In one word – AMAZING!

I will admit to not trying bread pudding until I was an adult.  It never sounded appealing to me because I always thought it would taste like mushy bread.

Why would I want to eat mushy bread?

Let me assure you that it not mushy bread.  I mean it is, but it is not at the same time.

First I want you to imagine french toast, maybe drenched in syrup.  That’s mushy bread, right?  But it is a DELICIOUS mushy bread.

Now that you have that image, let’s replace the syrup with a thick, creamy, super sweet sauce.

THAT is bread pudding.

Do You Refrigerate Bread Pudding?

Make sure you store your Keto bread pudding in an airtight container in the fridge. It will safely keep for 3-4 days… but if my experience is any indicator, you’re going to have a hard time making it last that long!

Do You Eat Bread Pudding Warm Or Cold?

Totally up to you!

I personally like to let this low carb bread pudding rest for 20-30 minutes when it comes out of the oven before eating it.

But you can enjoy this recipe hot, warm, or cold depending on your preference!

How To Make Keto Bread Pudding

The first step is to make the bread we’ll use in the bread pudding.

Preheat the oven to 350 degrees F and grease a cast iron skillet with coconut oil.

Next, in a small bowl, combine the egg whites, egg, and apple cider. Beat the mixture with a fork until well combined.

Then you’ll add the egg mixture into flour mixture and mix it together a whisk. It will be chunky and not fully combined, which is fine!

Add boiling water to the mixture and continue whisking until it begins to thicken into a loose dough consistency (about 15-30 seconds).

Place the dough into the cast iron skillet and press down until it evenly covers the skillet.

Bake the dough for 45-50 minutes, then set aside to cool.

NOTE: If I am in a hurry, I’ll take the bread out of the skillet and place it in the fridge to speed up the cooling process.

Once the bread is cool, we’ll preheat the oven to 350 degrees F again (if it’s not already still on) and prepare the sauce.

In a medium saucepan, add the heavy whipping cream, butter, monk fruit and stevia. Bring the mixture to a very light boil. You don’t want a strong boil, just the light beginning of a boil, then turn the temp down so just a few tiny bubbles remain.

Simmer for 10 minutes, stirring often, then remove from heat. Add the vanilla and stir well.

Now, let’s put it all together! Rip the bread up into small pieces and place the chunks back into the cast iron skillet.

Pour the sauce (minus what you set aside) over the bread. Try to make sure most of the bread is covered. Some will be sticking out, and that is perfectly fine.

Place the cast iron skillet back into the oven for 30 minutes.

Once the time is up, you can choose to serve the Keto bread pudding hot, warm, or cold! You can also pour any remaining sauce over top if you so choose.

Putting it all together

As an Amazon Associate and member of other affiliate programs, I earn from qualifying purchases.