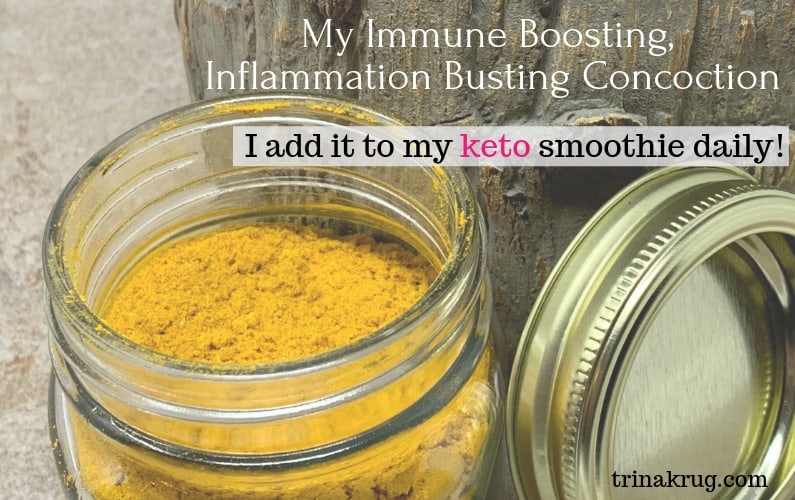 Recently, I’ve added to my daily smoothie to help my immune system and to also act as an anti-inflammatory and anti-biotic.  Now, I am making no claims here, but I’m simply going to talk about why I decided to add these spices to my daily routine.

For those that don’t know, I was recently diagnosed with Adult Onset Type 1 Diabetes.  Type 1 is the autoimmune diabetes where the immune system attacks the insulin producing cells until they are all gone and insulin production is zero.

I’ve been eating keto for the last year in order to keep my insulin requirements low.  Adult Onset Type 1 Diabetes has a slower onset than when children get it.  My son has Type 1 Diabetes and it came on fast and severe.  For adults, this means it is often misdiagnosed as Type 2 initially and it also means our bodies are slower to shut off insulin production completely.  Eating keto has, to date, allowed me to not have to take insulin.  Who knows how much longer that will be the case, but for now, it works.

The other thing is that I’ve been having some inflammation issue ever since my bladder surgery.  You can guess where the inflammation is occurring.  Let’s just say there have been a lot of bladder infections as well as a lot of times where I felt like I had one, but didn’t, yet still had the symptoms.  Let me tell you – it is not fun.  But, hey, I don’t pee my pants anymore, so there’s that ?

I’ve instituted some other dietary things and supplements but we’ll talk about those later.

Let’s dive into the 4 spices that I choose to take each day.    References for this article are listed in the show notes.  I am not one to use .com sites, but I choose to use Healthline as they list all their official studies where they got their information from (which are what I normally use).  They’ve done my job for me and paraphrased, so I’m going to paraphrase the paraphraser.

The spices I uses are the below spices that I got on Amazon: Turmeric, Ginger, Garlic and Black Pepper.

The following benefits are all according to Healthline (and many other sources too) but specifically from Healthline.

The first is turmeric.   Turmeric is like the super spice of spices.  The king of the jungle.  The main active ingredient in turmeric is curcumin and that is what we are going to focus on.  Curcumin just happens to be fat soluble, so it is a pretty perfect additional to my fatty keto smoothie.

A common mistake, actually, is when people don’t take turmeric with fat.  Take it with fat folks!

According to Healthline, the following is true:

Like I said, turmeric (more specifically curcumin) is a powerful compound.

Alright, let’s talk about ginger now.  I don’t know about you, but I love ginger – especially fresh ginger.  Just like with turmeric, ginger has a component that has powerful medicinal properties.  It is called gingerol.  Like curcumin, gingerol has powerful antioxidant and anti-inflammatory effects.

I think most people are aware of ginger’s ability to help with nausea.  Ever drink ginger-ale when you were sick with a stomach ache or suffering from morning sickness?

Another super cool benefit is that ginger may reduce blood sugars.  WHAT???  I’ll take that! And ladies – it can also reduce PMS pains.

A lot of overlapping properties with curcumin, don’t ya think?

Alright, on to garlic we go!

Just like with turmeric and ginger, garlic also contains component with medicinal properties.

Garlic is known to be able to help with sickness and the common cold.

It can also reduce blood pressure just might lower the risk of heart disease and help prevent Alzheimer’s.

Here’s a big reason that I like garlic and that is that may help detoxify the body of heavy metals.

And ladies – garlic has also been shown to help with bone health in women.  As I get older, I definitely could use this!

Lastly, let’s touch on pepper.  I’m sure black pepper has some nice properties, but the reason I add it in is due to turmeric.  The curcumin in turmeric is not absorbed very well in the system.  According to Healthline,  “…curcumin is poorly absorbed into the bloodstream. It helps to consume black pepper with it, which contains piperine, a natural substance that enhances the absorption of curcumin by 2,000%”.

Now, I will say that I do not take nearly the therapeutic dose of each of these, but I don’t think that is necessary.  And I also think easing into it is better.  So, maybe 6 months from now, I’ll be taking a lot more.  Who knows.

Anyway, I make a concoction ahead of time so that I’m not measuring 9 million things each day.  In a small glass jar, I’ll mix 6 tablespoons turmeric, 3 tablespoons ground ginger, 2 ¼ teaspoon garlic powder, and 2 ¼ teaspoons ground black pepper.  I mix it up well and am working up to taking 2 teaspoons in my smoothie each day.  It roughly equates to 1 teaspoon turmeric, 1/8 teaspoon garlic, ½ teaspoon ginger and 1/8 teaspoons black pepper.  For those good at math, you’ll notice that only adds up to 1 ½ teaspoons. So you get a bit more of each spice, but you get the idea!

All in all, I am trying to take back my health, slowly and deliberately.  Keto has kept me off insulin and now I need to focus on some other areas of inflammation and immune system issues.  Healing my gut plays a big role too since I’ve had 4 rounds of antibiotics in the last 6 months which is more than the last 20 years.  My poor microbiome.

This is just a step towards natural health for my body!