Working Out on Keto 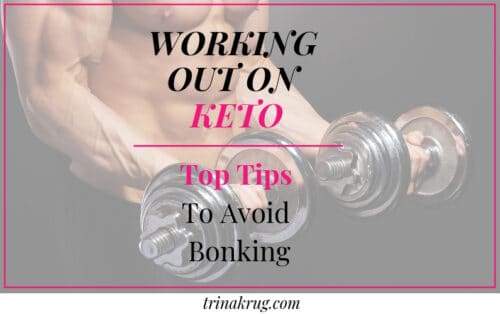 Have you thought about Working Out on Keto?  GREAT!  Moving your body is one of the best things you can do. Find out how to do it right with keto!

Working Out on Keto

Let’s talk about keto and working out.  I’ll be honest and say I am just beginning the next evolution of my fitness routine while living the keto life.  I was really into heavy lifting and endurance sports before keto and then I fell off the fitness wagon entirely for 2 years.

After being diagnosed as prediabetic, I had to make some changes.  Although… adult-onset Type 1 diabetes is now being discussed since it isn’t insulin sensitivity after all, rather my body simply is not producing insulin. Well, it does, but it is sitting just above zero.  New tests are coming soon, but for now, I manage it with keto.

Anyway, when I first embarked on the keto journey a year ago, all I heard was:

Blah, blah, blah.  I didn’t workout for the first 2 months simply because I wasn’t motivated.  I lost 20 pounds and felt great.  But again, I found myself in a state of being skinny fat.

Folks – skinny does not equate to healthy.

So for the last 10 months or so, I’ve dabbled here and there in different workouts, running, etc..  I even had a surgery this summer to help. For those mommies out there – it was the “I had 4 large babies and can’t do anything without peeing my pants” surgery.  That journey has been bumpy, but I am not free to workout without, um, distractions.

A few weeks ago I decided that rather than train for an Ironman, I wanted to beef up my muscles and body again.  I LOVE lifting, like with a passion.  I used to be so strong and my body was on fire.  Then I let it go and I let my ego get in the way with not wanting to start at the bottom again.  Well, I threw that ego away last month and started lifting again.  Serious lifting.  5 days a week.

Let me just say that it has been humbling.  For several reasons:

My muscles being gone is just ego.  Whatever.

But lifting being harder?  Um, that’s legit.  I’ve waited to discuss this as I was playing around with different preparations for lifting, pre-workouts, etc… Today was a killer day lifting and I finally found my groove.

I think it is fairly straightforward why an endurance athlete might fare better on keto given that their body is already a fat burning machine and fat can sustain a whole lot longer than sugar without the constant need to replenish with 9 million grams of crap carbs.  Aerobic, lower intensity exercise is generally in the cardio and fat burning zone.

But with anaerobic exercises like sprinting and heavy lifting, the primary source of energy is from carbohydrates.  So herein lies the problem that I came across.  My muscles would just stop working halfway through my set.

So, what to do about it?

There are a couple of theories and options.  You all know I’m a fan of cyclical keto – which is basically taking one day a week and increasing healthy carbs to replenish glycogen in the muscles and take some stress off other systems.

There is also something called targeted keto which means you ingest 20-30g of fast acting carbs before a workout so that they are utilized as needed.

Now, the longer you are in ketosis, your body becomes fat adapted.  This means it gets more efficient at burning fat for fuel and isn’t as dependent on the carbs for short bursts of energy.

Often people will start keto, realize they just “can’t” exercise and stop.  Verses pushing through until their body fat adapts and then noticing how things go back to (almost) normal.

There was a study done in 2014 where they took a group of college-age resistance-trained men and split them into 2 groups.  One was a keto group and another was a standard diet.  After 12 weeks it was found that the lean body mass increased greater in the keto guys, as well as muscle mass.

I am not a fan of targeted keto just yet.  I might get there in another month or 2 as my weights increase.  But for now, I’m not going there yet.

So, what is another option?

A pre-workout drink.  Now the problem here is that most pre-workout drinks are loaded with carbs.  Perfect Keto has one that is for keto athletes.  I actually had this in my cupboard for a long time and forgot about it.

When our bodies may not be able to break down fat FAST enough, it needs a little help.  This pre-workout contains:

I took this pre-workout drink after struggling to lift for 3 weeks and I was blown away.  I am doing an A, B, C rotation with the same exercises (ex, legs and shoulders is A, chest and triceps is B, back and biceps is C) and I write down my weights so I know where to start on the next one.

Not only did my muscles NOT fatigue and crap out like there were doing, but I was also able to increase my weights in pretty much every exercise.  So I increased my weights AND added reps.

Why did it make such a difference?

Well, ketones and MCT.  If my body isn’t able to break down fat fast enough to sustain my energy, then drinking ketones can only help.  And MCT is quickly broken down for utilization as well.

Now, you all have heard me scream from the rooftops that exogenous ketones are not necessary for a keto diet.  That is my stance.  Now, that doesn’t mean you can’t utilize them for energy, but just keep in mind that if you drink ketones, your body will use them first vs create your own through breaking down fat.

Which is fine in my case since breaking down my own fast enough and efficient enough for lifting heavy is difficult at the moment.

Look into targeted keto and a keto pre-workout drink.  And, of course, experiment!